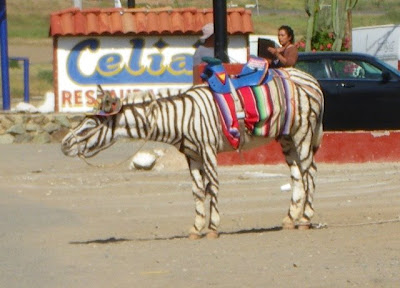 This was a kayaking excursion but as with most good kayaking adventures... it's not just about the paddling. This tale also involves a burro in disguise... (no, that's not REALLY a zebra!)... and a critical volume of tequila (nobody knows exactly how much)


And in the good tradition of Aqua-Adventures adventures... (There HAVE been others... adventures... well, traditions too...) there was more to it behind first glance. Following festivities at a local bar/restaurant on March 31st (maybe I'll elaborate on those later...) had strayed beyond midnight, one person (I'll call her Jen to protect her identity) hatched the grand plan to open a zoo in a vehicle belonging to the Johnson kayak reps. This plan meant capturing wild animals from the plains of Mexico, and transporting them down the hill to the campground... starting with... yes, a zebra! It was dark... we didn't see the sign! 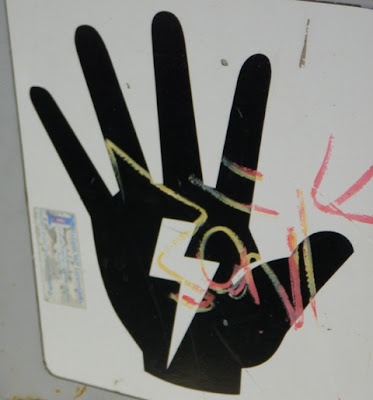 I have to say that I was amazed by the courage of AC-DC style rock singer Phil Hadley of England... who had earlier jolted the whole bar-full of youngsters onto the dance-floor with his inflammatory frontmanship... as he bent over to check out both ends of the zebra in the dark to figure out firstly which end was the front, and secondly whether the animal was male or female... I've always had a healthy respect for teeth and hooves... and the rest of the arsenal, so to speak. Brave man!


The zebra was tethered by a long rope... but didn't seem to want to move an inch from where she (Phil decided) stood. (Video clip by Russell Farrow... but don't tell Claudia)

It was then... in the silence of the wide plains of Mexico... quite close to the silent village... above the silent bay... that the zebra began to bray! The deafening foghorn of a sound echoed around the valley. 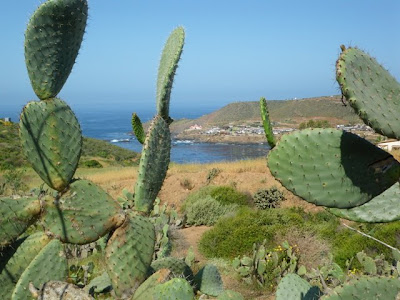 Two things then happened. First, almost every one of the brave hunters standing around the zebra sprinted off into the dark, followed by the sound of tumbling and crashing as they discovered the edge of the tall dusty bank down to the road. Second, the two remaining with the braying zebra (myself included) ran out breath through laughing so hard we became almost totally helpless. 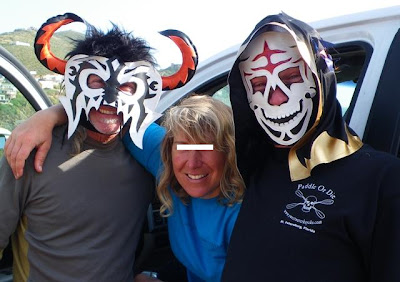 Next day some of the group remained in disguise, just in case they could be identified...

Under the circumstances, if (Jen) had managed to borrow the burro, she could have ended up in a Mexican jail... which was exactly what happened to one of the two Johnson reps on the way back across the border, after the next, and our last, morning of paddling in Baja. (Jen), back at San Diego, received the phone call. Their vehicle had been impounded, one of them detained, perhaps indefinitely, leaving the other stranded at the border without transport. As (Jen) wrote down the details on her note-pad in dismay during the five minute phone call, she repeated out loud no less than three times for the dazed rep at the other end... yes... the date? Again? Yes... April first.

Oh and the other video clip? (Jen) kindly lent me her Point65 Whisky16 for the week... but with the repeated plea "PLEASE don't damage it". Of course, I love rock-hopping and playing in rough water... and I love the challenge of doing it without contacting rock... unlike someone else in her other fiberglass boat... how does the song go? "We don't tip-toe through the tidepools"? Well... of course what the eye doesn't see...