One of my favorite viewpoints of and from Seattle has always been from the Alaska Way viaduct that ran overlooking  the piers of Elliott Bay. Passing through Seattle on my shortest way home from the airport  I always looked forward to the rejuvenating  view to one side of the steep city streets and tower buildings, with to the other side a spectacular panoramic view of the piers, docks and beyond toward the Olympic Mountains. 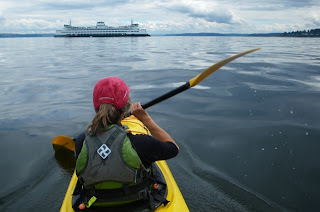 Demolition of the viaduct began this week. The city plans to replace the aging structure with a hopefully earthquake-proof toll-tunnel to by-pass the city center by 2016. Then my route will likely follow the dreary I-5 corridor. But there is an alternative way to experience the wide panorama without going through Seattle. 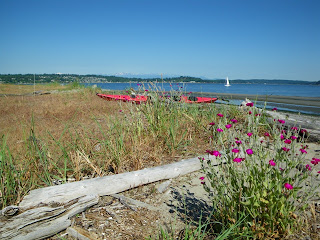 Out across Elliott Bay and past the peninsula of West Seattle is the small tree-covered Blake Island.


A lighthouse-hopping mostly coastal route takes you past West Point lighthouse in Discovery Park, across the mouth of Elliott Bay to Alki Point lighthouse, then over the narrow channel to arrive at Blake Island.


A quieter more direct alternative down the center of Puget Sound from West Point lighthouse leads directly past the south end of Bainbridge Island to Blake; quiet that is apart from boat traffic which includes the occasional container ship bound to or from Seattle or Tacoma, and ferries crossing the sound.

If you're lucky you might spot a passing orca or two. 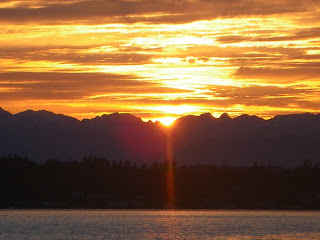 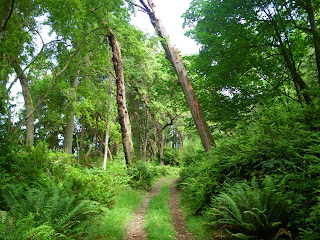 Blake Island is unbelievably calm compared to the mainland; an oasis of peace within sight of the city. A state park since 1959, the only development is at the northeast corner. Here is the Tillicum resort, with its boat docks and the largest of the island's three camp grounds.

The rest of the island, logged of its forest in the mid-1800's at a time of strong timber demand from San Francisco, has grown back into what might be described as a wonderful woodland park.  Through this woodland meander miles of trails, including the round-the-perimeter trail of about 4 miles. 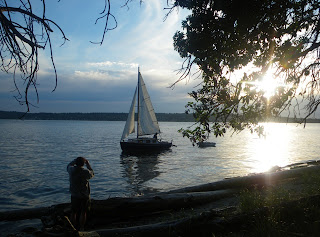 At the base of the spit on the west side  is the second largest camp ground. Boat moorings offer a mostly sheltered tie-up a few yards offshore the main camp sites.

A more exposed area of the spit is reserved for kayakers and canoeists and is part of the Puget Sound water trail. It's not wilderness, but it is a treat and retreat!