On Polar Tides and the Torngat National Park


The Torngat National Park was created in 2005 at the northernmost tip of Nunatsiavut, Labrador. It encompasses a wonderful area of jagged mountains running down to fjords and steep capes, with islands offshore.

It is tundra; the realm of the polar bear and caribou, wolf and arctic fox. Offshore the cold Labrador Current carries a procession of stately icebergs south toward Newfoundland.

On clear dark nights the sky comes alive with the dancing curtains of the northern lights that subdue even the brilliance of a full moon.

Boasting some of the oldest rock formations in the world, at about 3.92 billion years old, The Torngat Mountains have shouldered an almost supernatural role affecting endless generations of hardy northern people. The strong winds that can slam down without warning from the mountains into calm fjords, the ghosting caribou camouflaged against the terrain, and the polar bears that appear where they were not evident a moment before, as if materializing from mist and cloud, could be easily identified as the spirits of these mountains.


Nowadays you can join a tour backpacking, flying in by helicopter or small plane, or by boat along the coast. Nunatsiavut Tourism nowadays can help you learn more. But until recently the idea of tourism remained a faraway dream. The Torngats were reserved for a handful of hardy adventurers and a few tourists arriving by boutique cruise ship.  So what was Labrador like then?

You can gain more insight from my newly released FalconGuides book, On Polar Tides, (which better covers the ground than my earlier Stepping Stones of Ungava and Labrador.)  In the book the Torngat Mountains and the coast of Ungava and Labrador is revealed as experienced from a kayak before the National Park was created. Take a deep breath of the clear fresh air of northern Labrador, and dive into the story! 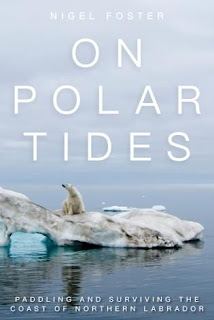 Purchase a signed copy of On Polar Tides from my web store, or find the book on Amazon, direct from the publisher, or from your local bookstore. I hope you enjoy!

(Nigel Foster offers a slide presentation about his adventures in Labrador titled "On Polar Tides". Contact Nigel with any Requests/Invitations.