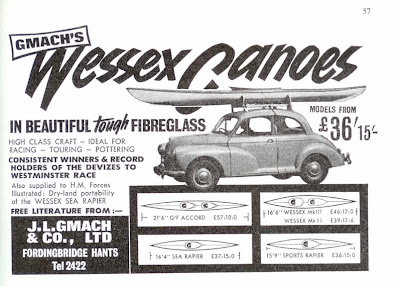 In 1967, died. He was the son of one of the original tailors who produced the first folding Kleppers in 1905 to speed up trips from the mountains. was associated with the design of the in which crossed the Atlantic. “the first thermoplastic kayak” was displayed at the annual boat show in 1967. And from kayaks to paddles, (who made "Mitchwood" paddles in UK and now owns Mitchell Paddles in USA) won silver medal for slalom kayak in the 1967 world championships. And in the realm of competition, the Atlantic beaches of Bude suffered the annual invasion of competitors for the week-long surf kayaking event.
In this context, back to , from the start of this piece… wrote a great (truly) book titled “Living Canoeing” which published in 1969 and according to was started in 1967. It is a classic book, with content mostly valid today. I can see how later writers have likely been influenced by the style of line drawings that illustrate many of the technical aspects, and by the content of the Sea Kayaking sections of the book. Not Byde’s first, or last writing achievement, but possibly his finest. Returning to the photo of Byde upside down in a kayak on his lawn, you can see similar images (in fact rolling sequences) in my own “Kayaking; a beginner’s guide” and “’s Sea Kayaking”... I've picked up a technique or two from him. But perhaps it was not his aversion to being called a rhino that drove Alan Byde to New Zealand. Maybe when he was sitting in his back yard underneath his kayak he was simply preparing himself for living "down under".
Posted by nigel at 10:06 PM 3 comments:

The Olympic Peninsula, which defines the northwest tip of Washington State, is home to the Makah tribe whose land includes Tatoosh Island at the mouth of the Strait of Juan de Fuca; a great kayaking area. For a couple of thousand years there was a Makah village site on the Pacific coast at Cape Alava, south of the Makah village of Neah Bay. Part of that village was buried by a mudslide around 1700. Storms in 1970 began to expose artifacts that had been engulfed by the slide, and excavation uncovered six long houses and more than 55,000 artifacts.

The Makah Cultural and Research Center (museum) at Neah Bay has a great display of these artifacts, including canoes, tools and fine cedar bark fiber baskets.

Familiar with the magnificent coastline Kristin and I determined to explore somewhere we'd not seen before; Lake Ozette, third largest lake in Washington State. A narrow strip of forest stands between the lake and the ocean.

High pressure clamping a damp marine layer of low cloud and fog to the coast had finally moved, freeing the coast to hot dry weather!

A circuit of the lake in our Point65 Whisky16s found us dodging for shade, and discovering brilliant red willow roots dangling in the lake, deep blue gentian flowers in the lakeside meadows, and snaking tree roots where higher lake levels or rougher weather had eroded the shore between the trees.


A trail leads from a half-hidden landing place into the semi-darkness of temperate rain forest. A crude bouncing boardwalk  leads two miles to the Pacific, threading between the trees and above the channels and streams.


Finally we broke through the deep undergrowth onto a pile of bleached logs, and beyond to a sun-baked sand beach. It was hotter than I've ever experienced on the Washington coast, so we soon plunged back with relief into the shade beneath the dense canopy of forest. Back at the lake the breeze was brisk, whipping up little breakers that kept us pleasantly cool with spray for the remainder of our circuit of the lake.


Next day we took a different board walk hike from our camp site near the Ranger Station through the forest to the ocean.

There is another route from the same start place that reaches the beach three miles north from the one we took... so we hiked the beach and followed the other route back.

Since the weather was so great and there were almost no bugs, after dark we lay on our backs in the open watching the Perseid meteorite shower... shooting stars blazing across a star-studded sky!


(by the way... slime molds actually do move around... I wasn't joking! They're really interesting creatures!)