A pack of Running Dogs and Cat


Green Lake is in Seattle. Its shores once graced by the open canoes of Seattle natives are now circled by a track that keeps active Seattleites fit and trim. Runners, walkers, mothers with strollers and kids on skateboards circle this once pea-green lake whose waters are nowadays so clear you can see fish on the bottom. That's good news for the eagles that hang out in the trees of Duck Island and drop by for a snack of fish or an unlucky coot.

Paddling one day on Green Lake I ran into a family in a green canoe and stopped to chat. Cat with a quirky smile explained she had crafted the canoe's wooden gunnel herself.  Later I discovered she has a workshop ideal for that kind of thing. She's a luthier. Actually she's not just a luthier; she's an exceptionally good and well-respected luthier.  She repairs instruments, mostly guitars and she's in demand for repairing rare and valuable ones.  Her workshop, Sound Guitar Repair, is in Fremont, Seattle.

Rick sat at the other end of the canoe, quiet and confident. He eventually revealed that he also works in wood; he too is a luthier. He describes himself as a work in progress, learning how to build acoustic guitars, but that's only because as a true perfectionist he cannot be satisfied with the best. He moved to Seattle from Vermont where he played with race cars, built kayaks, instructed skiing and as a woodworker began building "Running Dog" guitars.

Rick Davis is no amateur.  Author Tim Brookes wrote his book "Guitar; An American Life" around him and his guitar building. Rick used to be the Executive Director for the Association of Stringed Instrument Artisans (ASIA). He was featured in the recent April 2012 Acoustic Guitar magazine in a double-spread article by Thomas M. Lell.

He is a talented artist in wood. He can tap a board of wood and know its prospects as a guitar top from the sound it makes. He can then transform the rough board to release its full potential by tapping and chiseling, tapping and chiseling until the sounds from bass to treble ring out, and the board begs to be played. Then he'll bend all the other pieces of carefully selected wood together to create an instrument that plays like a dream and looks incredible!

Rick and Cat have their workshops together in a modern industrial building close by the Fremont Canal.  Cat's space is built within Rick's shop, allowing each to work undisturbed when they wish. That is undisturbed when people like me don't come barging in to visit.

Today Rick is working on small parts. His binding and inlay work is impeccable. He indulges me when I ask to see a baritone guitar he has already completed, and he open up the velvet-lines case to reveal a long-scale instrument with an oval sound-hole. Releasing a chord that breathes deeply into air I'm astonished at its rich sonorous voice.

Sometimes Rick builds a guitar just for himself that he's reluctant to sell until his relationship with it has had time to mature. But mostly he builds custom guitars for others, tailoring the sound and the desired appearance to the customer's playing style and desires. Each piece of wood is specially chosen for its qualities with the desired end in mind. I'm fascinated.

When he's not kayaking or canoeing, Rick keeps fit by fencing. That's not the pounding stakes into the ground type; it's the skewering of opponents with a foil. He leaks from various ouch places in his legs where he's failed to be quite as nimble as he'd like to be.

Cat Fox in her box; in her room within a room, is preparing for an upcoming presentation she'll give on keeping chickens… a fowl past-time of hers that seems decidedly wrong for someone with her double-predatory name. On her bench beside a life-like black rubber crow is part of an old Gibson harp-guitar, probably almost 100 years old. She opens up a large case and takes out the reddish full body of the instrument itself, minus its strings and a few other bits. It'll take time and patience to repair and reinforce this giant and to tune it back to its original state, but she'll do it.

Instruments that pass through her hands are as good as new, and in some cases look and play better than new. 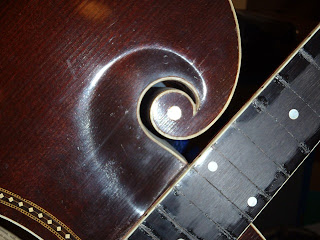 I have to leave Cat and Rick to let them work, but I leave with the rich sound of the baritone guitar in my head. It's a wonderful instrument I'm drawn to not only for its voice but also for the wonderful inlaid portrait of a bear that glows like ice from the guitars head. It is as Rick points out the "bearitone" guitar. 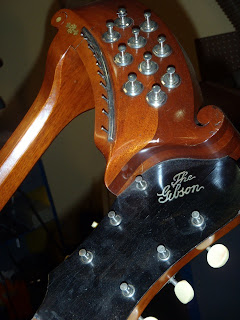 And I leave with a taunting aside from Rick… he'll soon have a used Running Dog mini-jumbo passing through for sale… at an insanely reasonable price. He turns his head sideways with a quizzical look to see if I'm tempted. Of course I'm tempted… I'd love to have a room-full of his guitars! Dreams, dreams, dreams! But I am already proud owner of one Running Dog guitar… maybe I should work toward a pack?
Posted by nigel at 4:24 PM No comments:

A Winn Winn situation; Paddle a long way around Ireland

This is an unpretentious personal account by Jasper Winn of his solo sea kayaking journey around Ireland . 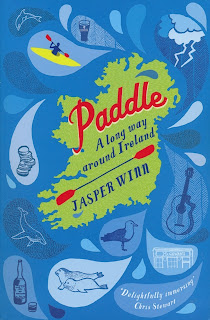 Spurred on sometimes by the goal of completing the trip, and sometimes by the goad of realizing how dumb he'd appear if he gave up after proudly announcing to someone in a pub what he aimed to do, Winn pushed his way all around the Irish coast in one of the wettest summers in history.

I enjoyed Winn's stream-of-consciousness delivery. It's exactly how things pass through your mind on a long solo trip: the anxieties about landing, the possibility of running into something alive and big with teeth, a lusting for food, or company, or uncertainty about what that flashing light means. It's also how things materialize, like flotsam on a beach, sorted by size and type by the waves, or how people appear out of the mist when you think yourself alone, or take you into their home and feed you when you're trying to pin down your tent in a gale.

He sets out to complete his trip planning to find guitars to play and friends to meet in the local pubs, a roof over his head when he gets tired of being storm-bound in a tent and the possibility of a hot shower and a restaurant meal when fancy takes. He's not out to break a record set by anyone else, or win any race, instead it's a personal challenge.

If like me you enjoy sea kayaking, or think you might, and you'd like to know what it takes to launch from your home town to take what comes day by day, or if you'd simply like to know more about Ireland, then you'll find Jasper Winn's book a pleasing read.

Published by "A Sort of Books" in UK