Looking east from the road as we approached the town of Taitung on the southeast coast of Taiwan, the Philippine Sea appeared as concentric bands of color. Beyond the broad white ribbon of surf and foam the water appeared muddy grey, but a short distance farther offshore was another clear dividing line. Beyond that was dark blue. That, Jahfong explained, was the Kuroshio, or "Black Current", which runs north along the coast of Taiwan. In English, he added, it is called the Blue Current.

We were bound for Ludao: "Green Island", which lies about 20 miles offshore.

Although the ferries to more distant Orchid Island were already cancelled due to big seas, for now the Green Island ferries were still running. Jahfong took extra care cushioning and strapping down our three kayaks to the foredeck. In this weather nobody would be allowed on deck once we left harbor.

Having bounced across the current to Green Island with no damage to the kayaks, Jahfong's next challenge was to strap them securely enough to a flat-bed truck for the journey to a small primary school by a tiny harbor where we would launch on our island circuit.

A timely launch next day was thwarted by our previous evening's visit to the grill. Or to be precise, by the green bottles of Taiwanese beer. Too many green bottles. "Don't mention the beer!" So we were late leaving.


The island is volcanic in origin, and the day was overcast. The black cliffs and jagged offshore rocks looked foreboding as we pushed our way through turbulent channels between sea stacks along the coast into the failing light of evening. The evening may have been somber but the water still glowed an incredibly deep dark blue!


Jahfong knew of a small gap in the raised grey coral reef that rings the island; a gap we threaded to reach a calm pool with a shore of white coral sand.

Here, he explained, was the place the earliest settlers on the island made their home. In a valley cradled by steep cliffs and heavily vegetated slopes, and with spiky sea stacks offering a little protection from the full force of the ocean, it was a natural choice.

Remains of buildings in the valley still have tiles on the roofs, pinned down by boulders against the force of typhoons, which occur about four times per year here. 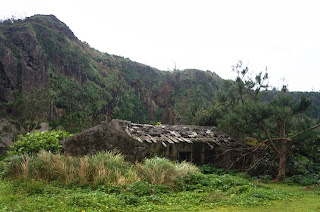 On our way again the following day I was to experience the corners of the island. There  is very little tidal range or any tidal flow here. However, the Kuroshio current is steady enough to produce the effect of a tide race around each of the main three points of the island that jut out into the Blue Current.

With the current running constantly in the same direction, it would only take a little inattention at the north end of Green Island, and we could be on our way to Japan!

Back at the little harbor by the school, I learned that Yali had just now become the first woman to paddle all the way around the island!  Congratulations!

Before returning to the Taiwan mainland I gave a slide presentation to the school... "Encounters", with some basic translation. The older children had prepared questions for me in English, which they read out to me, and I did my best to answer.

Jahfong and Yali, visiting over the years, have offered the schoolchildren the opportunity to learn to kayak. The children in their final year then have the chance to kayak around the island with them in three stages, in tandem kayaks, missing out the sections with the strong current. It is very fitting that growing up on an island, they should have the chance to know it from the water as well as from the land. It has become something of a rite of passage and point of pride, an achievement valued by children and parents alike. And of course it is a very special kind of headmaster who has the confidence to support such an ambitious annual adventure.

I felt sad to leave Green Island. There was so much more still to see. The ferry rushed out into the blue current, spraying white foam to either side and sending flights of flying fish skipping and gliding away across the water. Thanks Jahfong and Yali for planning such a fun adventure!