Stepping Stones of Ungava and Labrador 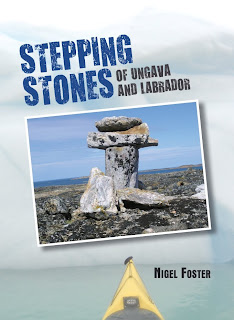 The new book "Stepping Stones of Ungava and Labrador" by Nigel Foster (Outskirts Press) has just been released!

Last night at an impromptu dinner party a friend's house I was asked to read out loud from the book one particularly harrowing section when Kristin and I were confronted face to face by a polar bear. Reading the story out loud brought me right back to the kayaking trip, in a different way than when relating it at a slide presentation to the Tacoma Mountaineers Club a week ago. With both story-telling and reading, you adjust the pace and emphasis to develop the tension in the story, responding to audience reaction. Story-telling during a slide presentation, I draw the story from my memories; from the images in my head. Reading last night, the story was presented to me as written; it was a direct input, and as I read I found myself creating mental images from the text.

So what about the polar bears? I didn't see any the first time I attempted the journey along the uninhabited northern section of the Labrador coast in 1981. But that time I traveled south from Iqaluit along Baffin Island's Frobisher Bay, crossed Hudson Strait and spent only 8 days in northern Labrador. When I returned to northern Labrador with Kristin Nelson we had 16 close sightings, and many more sightings of what were almost certainly bears. Not enough data for any conclusion. But in correspondence with Neil Burgess from Newfoundland, who was leading a research study into the impact of PCBs (discussed in "Stepping Stones") on breeding sea birds in the Saglek area of Labrador, he declared that his number of bear sightings in 2007 on the islands in Saglek Bay were dramatically more than in 1999. He continued..."I had a chance to talk about it with a couple of polar bear biologists who were doing a helicopter survey of Labrador polar bears in 2007. Their speculation was that climate change was disrupting the normal migration patterns of the bears. Normally in late winter the bears move south over the sea ice from Baffin Island and along the Labrador coast to the area where harp seals have their pups on the ice in early spring. When that is over, the bears migrate north on the ice back to Baffin Island. Now the 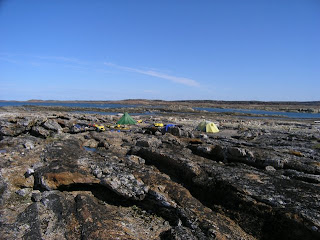 sea ice is melting before the bears can get back to Baffin and they end up swimming ashore in Labrador. Folks in Nain tend to agree with this."

That trend does little to invite kayakers to explore the coast described in "Stepping Stones", at least not camping in the way we did, and especially not in the northernmost section which has recently become the Torngat Mountains National Park

But polar bears make up just one aspect of travel in Labrador. The area is fascinating for its prehistory, with evidence of population going back 7,000 years. Historical evidence from Vikings, European fishermen, Moravian missionaries, Hudson's Bay trading stations and medical missions, early exploratory flights, and radar tracking stations give the area a depth of fascination for me. Considering the phenomenal tidal conditions of Ungava Bay, the characteristic 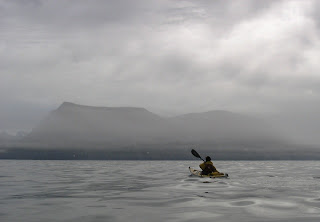 fog-swathed mountains of northern Labrador, the ground-hugging tundra vegetation and the night-time dancing ribbons of green aurora borealis, I admit it was the place that attracted me. But after completing the trip I realize that it was those few people that we met in Ungava and Labrador that made our trip rich!


(You can buy (or order) "Stepping Stones of Ungava and Labrador" softback or hardback from your local bookstore, or buy online from any of a number of web stores.... or you can buy from us at the Nigel Foster Kayak Store.)