A Touch of Silver; Canoeing the Silver River Florida


Close to the water among the lily pads and the swamp cypress knees is an ideal place from which to view wildlife. 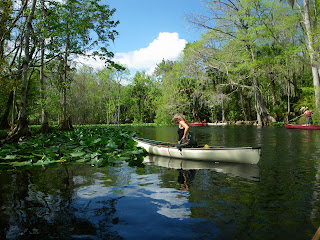 Not that the creatures here pay much heed to a group of canoeists. And there are about eight of us paddling solo canoes, from Sweetwater Kayaks Florida, from San Diego, from Seattle and New England, and a few other places.

Several kayakers have been learning canoe technique from Phil who has come over from England to teach… and to soak up the rays!

An anhinga crouches on a low branch, ready for take-off as someone pushes along underneath. Phil calls a warning. Anhinga typically squirt before take-off and it's no fun being hit! 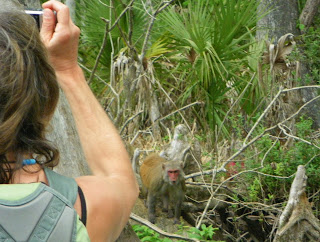 Phil is looking forward to seeing monkeys. Rhesus monkeys were introduced here to add to the jungle-like atmosphere by the resort at Silver Springs, some say for a film. Several troupes of them range through the trees along the bank, occasionally biting a tourist or snatching sandwiches from the unwary. I keep a cautious distance from them while we watch the crazy antics of a group of youngsters overhead. The watchful mothers growl a warning.

Monkeys are not the only creatures to deserve a little respect. Alligators sun themselves on the banks, and lurk like logs in the floating weed. They're so well camouflaged that sometimes one will erupt form the undergrowth and crash into the river, startling us as we pass just feet away.

I can only imagine how quickly alligators can snatch their prey. Turtles and wading birds are everywhere along the banks and on logs and branches by the water. I watch a little blue heron stilting across a raft of floating vegetation seemingly unaware that one of the logs in the raft was a 'gator.

Deer move quietly through the woods near the shore. When they swim they risk being grabbed by alligators.

A 'gator hauls out on a log in the sun, ignoring us as we pass.

Turtles have climbed out onto longs and roots to soak up the sun, every watchful for alligators.

We are approaching the spring head. The top of the river is a series of deep pools, and there really is nowhere further to paddle. The river begins here, gushing out from the rock far beneath us. The water is so clear it's easy to see the bottom, which appears a clear pale blue.

There are some statues down there, once part of a film set. The water is clear as air. We can see the tops of the statue heads from the surface.

When we turn to head downstream, thankful the current will finally be in our favor, the wind perversely begins to gust against us, rattling the dry palm fronds on the shore and downing some loose branches, and it doesn't let up. But after a warm day with no biting flies, a few puffy white clouds adrift in a wide blue sky above fresh new leaves sprouting on the trees, I'm not complaining!

All too soon it's time to leave Florida for sunny Seattle... but I'll be back! And if you're interested,
Sweetwater Kayaks runs adventures in Florida year-round from St Petersburg.