The Bridge: A twenty-four-hour snapshot from Denmark

Evening sun on an impossibly calm evening saw a small flotilla of kayaks weave along the shore and out from Sjaelland along Denmark’s Great Belt Bridge as far as its central span. It boasts one of the longest spans of suspension bridge in the world. 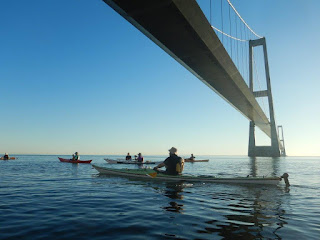 The water became so quiet we could hear every breath of the harbor porpoises. We were guests of our friends Mark and Jane, in kayaks courtesy of Korsør rowing and kayaking club. As the sun slipped slowly down, the water reflected like a sheet of silver. Next morning Mark drove us across the 18-kilometer-long Great Belt Bridge to Nyborg on the island of Fyn (Funen), gateway to the west of Denmark. Yellow painted bicycles propped around the town reminded me that the second leg of the 2022 Tour de France cycling race finished here a month earlier. This, one of three stages of this year’s race to be held in Denmark, was an early stage of the Tour won this year by a Dane: Jonas Vingegaard.

If the town had been disrupted by the cycling event, something was up today too. Despite the heat, men, and women in costumes from the Middle Ages strolled the streets past ancient timber framed houses, past lines of tents with red-striped canvas standing ready for street vendors. Up the hill stood the newly renovated tall brick Nyborg Castle founded in the 1170’s. There was an air of something about to happen, like thunder in the forecast, so we asked a woman in costume. She seemed eager to tell us.

The preparations were for the coming weekend of medieval reenactments, she said, with archery contests and jousting with lances on horseback. There would be a grand battle on the knights’ tournament site, along with foods prepared as they had been back then, music, and costumes from the past. It will be an exciting weekend ahead, she promised, but we were a little early. And the day was stiflingly hot. Too hot for fighting medieval style, and much better suited to modern-day ice-cream. We made our way, limp as lettuce, toward the harbor. At the waterfront, a big canvas teepee hung, still in the process of setup with one side drooping toward the makings of a beer bar. No, they were not ready to serve beer yet. By the water, a man in Viking costume was casually tying up the replica of a Viking dragon ship beside a pontoon. We joined the small crowd hurrying to look closer look at the new arrival. The ship was the replica of a death ship, the original found buried some 20 kilometers from here at Ladby. This, the only Viking ship burial discovered so far in Denmark, had been buried with the body of a local king with his weapons and other possessions, including horses and dogs, around 925AD.

The ship, at 25.5 meters long, (84 feet) with a maximum beam of 2.9 meters (9.5 feet) and a draft of 0.5 meters, was considered a medium sized, narrow, fast longship. It was a warship that could be powered by a sail of an estimated 60 square meters (think more than 30 x 20 feet) plus by 32 men rowing, sixteen along each side. I saw no sign of such a crew today: just one man and one woman, both dressed in period costume. Did they need crew? But they had only just arrived.

The water looked calm and inviting, but I am not a fan of swimming. I prefer kayaking. As good fortune would have it, a Kayakomat stood near the beer tent. I had seen several of these rental booths in the last three weeks in Denmark and was curious to discover how they worked. Considering my association with Point65, I should at least try one. There was a website address on the banner: easier for me than the Danish instructions on the board.

On-line it proved ridiculously easy to select the country: Denmark, and the location: Nyborg. There it was on the map: Nyborg. Up popped up suggestions of where to paddle, with local tips and information. Choose a kayak solo, or tandem? Or SUP? Selecting from the craft available, and checking date and time, it took just moments to fill in the required details and pay by credit card. Now to see if it all worked. Numbered berths held the kayaks locked on the rack. A code by text freed the lock and we slid each kayak out. We found the PFD, spray deck, paddle… and bailer and sponge stowed inside. A quick glance at the laminated map on the rack helped orient us before we carried to the water to launch. Ha! Freedom, sweet freedom! There is nothing–absolutely nothing–half so much worth doing as simply messing about in boats. (Kenneth Grahame: Wind in the Willows.). 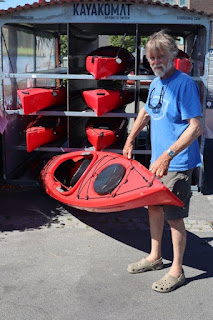 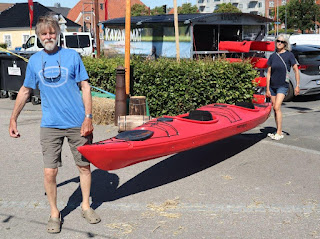 Afterwards, sponging out, stowing the gear, and locking the kayaks in the rack to verify their return was easy, in fact far easier than if we had brought our own kayaks. And after our exercise, surely, a beer at the tent would be perfect. The teepee bar’s not ready yet? NO! NO! Cried Mark! Oh well, back to Jane’s. We’ll have a cold beverage in her garden.
Posted by nigel at 9:21 AM No comments: