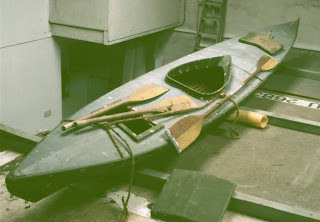 Little in sea kayaking is new. A few years back in the Shetland Islands, chasing old kayaks, I was led to this one, almost certainly from before the Second World War. Although painted in sombre green, a suitable war-time camouflage color, the underlying paint is bright yellow. Of course that might be just undercoat...

Interesting to me were the two bulkheads, sealing off the two ends. Bulkheads in sea kayaks are often said to be a more recent idea. The front bulkhead, positioned quite close to the cockpit, would have been ideal for someone of my leg length to use as a foot-brace (there was no other foot-brace fitted). The rear bulkhead was fitted immediately at the back of the cockpit, so in a rescue situation all water could be spilled out of the upturned kayak simply by raising the bow. Each compartment was sealed by a deck hatch.

The curator didn't know much about the origin of this kayak except that it was one of a number used to train Norwegian resistance fighters in the Shetland Islands in how to travel inconspicuously around the fjords during the Second World War. These visitors were then secretly returned with kayaks to Norway. Maybe something more is known about their activities in Norway? During wartime a number of similar kayaks were built on Shetland, but this is the only one known to remain.

The kayak was also fitted ready for a mast and rudder, and all that would be necessary to sail it.
The cockpit, compared to many earlier European designs, is quite small.
A detail you can't readily see from the image is that the hull was carvel-built and then covered with canvas. The deck on the other hand was canvas over a wood frame

Can anybody tell me more?
Posted by nigel at 1:45 PM

It might well worth contacting Duncan Winning OBE - he's a font of knowledge on the history of sea kayaking in Scotland. Contact details via the Scottish Canoe Association office - margaret.winter@canoescotland.com

Thanks Cailean! I hadn't thought to try Duncan but he's a mine of info!
nigel

There are stories of resistance people attempting to escape in kayaks across the North Sea, of perishing in kayaks on lakes.

A submarine kayak http://www.mil.no/start/aktuelt/nyheter/article.jhtml?articleID=95442 (no, not dated yesterday!)

http://home.no.net/malinge/pdf-filer/del-4.pdf tells that Martin Linge (later commanding NORIC 1) build himself a kayak in 1928.

I need to code the link to the submarine kayak properly. While I'm at it: Martin Linge's 1928 kayak, too

OMG- I cant believe Im talking to Nigel Foster. No doubt one of the highest statuses in the World of kayaking. I paddle a Pamlico 140. What age did you start kayaking?? And also, besides the three composite sea kayaks currently on the market that you have designed (shilute, shadow, legend), what other kayaks have you designed?? I'm sorry, Im feeling a bit star-struck!!

Bulkheads, like hatchcovers in kayaks are not new - well over a hundred years of such devices.
Quentin Rees's book "Cockleshell Canoes" says all there is to be said about British military canoes - the submersible canoe was known as the "Sleeping Beauty" or MSC (Motor Submersible Canoe).
The canoe in the photo with this article does not appear to be a military canoe

tonyf... yes, "Cockleshell Heroes" says a lot about the early WW2 military kayaks, which were used for a number of actions in different countries.
The "Shetland" kayak is almost certainly pre-war and shows major differences from the military-purposed examples. It's use for kayak training for Norwegian resistance fighters would have been simply using what was readily available.
(For those who haven't read the book tonyf suggests, here are a couple of links to learn more about the "Cockleshells".
http://www.historylearningsite.co.uk/cockleshell_heroes_of_1942.htm
http://intheboatshed.net/2008/12/29/cockleshell-hero-canoes-at-the-national-maritime-museum-cornwall/